Want to advertise in the fold?

Harvesting Marijuana – When To Harvest Your Marijuana Crop?

There are several important points to consider when choosing the optimum time to harvest your marijuana crop. There are different factors to consider between indoor and outdoor marijuana plants. There is the difference between Sativas and Indicas in bloom duration and final effect.

There is the difference between early and late harvesting marijuana to encourage head to body high respectively. There is the issue of chemistry because what we are really considering in terms of the ripeness relates directly to the chemical nature and state of the plant at harvest. Last, but not least, is the concept of the window for harvesting marijuana, where I will begin.

Window For Harvesting Your Marijuana Crop

This term indicates the period during which the plant is at its optimum state of ripeness. The window opens when the plant is first ripe. Somewhere along the line the plant becomes over-ripe which signifies the closing of the window of harvest.

For most Indicas grown indoors, the window of harvest is about two weeks long give or take a couple of days for various strains. Indoors, if going directly from an 18/6 hour vegetative light cycle to a 12/12 hour bud cycle, most indicas take about eight weeks to fully mature.

As to outdoors I can only speak from experience at the 45th parallel and the bloom times there. At the 45th parallel I’ve found most Indicas to be at peak harvest starting at the beginning of October, sometimes very late September, and running until the end of October, sometimes running into November during mild years or in a greenhouse. My favorite time to harvest a nice Blueberry Indica outdoors is in the second to third week of October.

For Sativa grown either indoors or outdoors, the window may be open much longer. Some Sativas take up to thirteen weeks to mature indoors. Outdoors many will go well into November and even December, if conditions are right (again, this is near or at the 45th parallel). Head High or Body Stone?

An important consideration has to do with one’s preference for a head high or more of a body high. A good head high can positively influence one’s mental state much like a psychedelic; whereas a good body high is more similar to a narcotic effect. Generally, head highs tend to be more up and body highs tend to be more down. Suffice it to say that a good healthy mix of the two is a fine goal to achieve.

If a very narcotic body high is desired, then a late harvest indicas would probably do best. For that best-of-both worlds high, experimentation with late harvested sativas and early-to-mid harvested indicas usually proves interesting.

When we speak of various highs experienced by different products, we are noting variations in plant chemistry. The chemicals we enjoy are produced within the glandular stalked trichomes, along the surfaces of the bud flowers (calyxes), bracts, leaves and stems, starting in or around the fourth week of the bud cycle. More and more of these trichomes develop as the plant matures.

I highly recommend that the serious cannabis student acquire a 30X power, illuminated magnifier. These can be found at most local electronics stores, often for under fifteen dollars. With the aid of the magnifier one can learn more about the detail of trichome development and ripeness.

As far as trichomes are concerned, the tall ones with swollen, clear, bulbous heads are what to shoot for. The denser the concentration, the greater the potency. Click the order button below to buy a digital microscope to help you harvest marijuana. 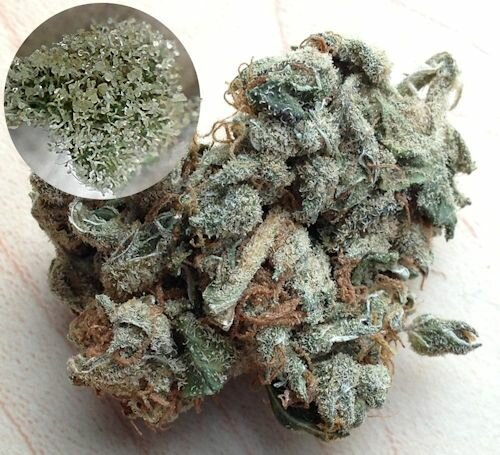 The Cycle Of Marijuana Plant Maturity

Starting in the third or fourth week of the flowering light cycle, glandular stalked trichomes will begin to form along the surfaces of leaves, flowers, bracts and stems. At the same time, more and more flowers (also called calyxes) develop into densely-packed floral clusters.

The pistils of the young flowers are bright white and turn reddish brown with age. The pistils and flowers develop from the bottom of the bud to the top. The older, lower pistils are the first to turn reddish brown. For most basic indicas this usually happens by the sixth week in the flowering cycle. It is about this time that the calyxes begin to swell.

Calyx swelling is a major indicator of peak maturity. The lowest, oldest calyxes swell first and the swelling works its way up to the highest, youngest flowers on each bud. At peak maturity about 90% of the calyxes will almost look seeded, they are so fat.

Three quarters to 90% of the pistils will have turned reddish brown as well. For a basic Indica this takes well into the seventh week of the flowering cycle.

By the end of the eighth week most of the calyxes will have swollen and a surge of trichome development has coated most of the buds. It is now that the development of a very discerning palate comes into play to determine the finest harvest time. Remember – patience is a virtue and often a discipline.

The ripening signs for most Sativas are highly similar, except extended over a longer period of time. Occasionally, some Sativas have windows of peak harvest that actually open and close. That is, for a week or so the plant may exhibit signs of peak ripeness.

However, a week later the plant may have a growth spurt, which lowers the trichome-to-fibre ratio and overall potency for a little while. Usually a fibrous growth spurt is accompanied by a corresponding trichome increase. Again, time and experience are the key elements in deciding when to start harvesting marijuana.

As the plant matures through its window of harvest its chemistry changes. As the window closes, the more desirable compounds begin breaking down into less desirable ones. Primarily it is THC breaking down in CBNs and CBDs.

Which particular combination of chemicals is the most desirable is purely a matter of taste and choice, developed over time and with experience. Set and setting also play an important role in determining which type of product is best appreciated.

Pleasant head highs are often desirable for social occasions, whereas a narcotic late-window Indica may work better as an evening medicinal herb. The main point is that these differences are chemical in nature and more research is needed to more fully understand this phenomenon.

Another important point is that much can be done to further enhance the chemical process, especially in regard to bouquet, aroma and flavor, given the proper curing process.

Just enter your name and e-mail address below to join our mailing list. Peace!
Your information will never be shared or sold to a 3rd party.